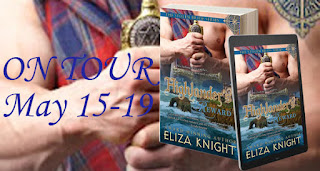 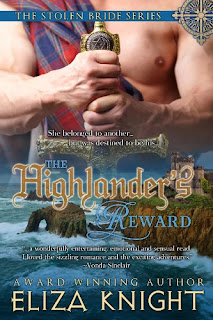 She belonged to another… But was destined to be his…
Lady Arbella de Mowbray abhors the idea of marrying an English noble occupying Scotland. When she arrives in Stirling, she is thrown into the midst of a full battle between the Scots and the English. Besieged by rebels, she is whisked from her horse by a Highland warrior who promises her safety. But when he kisses her she fears she's more in danger of losing herself.
The last thing Magnus Sutherland wants is to marry the beautiful English lass he saved. As the laird of his clan, he has a responsibility to his clan and allies. But when Arbella is attacked by one of his own men, he determines the only way to keep her safe is to make her his. A decision that promises to be extremely satisfying.
Magnus brings Arbella to his home of Dunrobin Castle in the Highlands. And that’s where the trouble begins… Their countries are at war and they should be each other’s enemy. Neither one considered their mock marriage would grow into a deeply passionate love. What’s more, they were both unhappily betrothed and those who've been scorned are out for revenge. Can their new found love keep them together or will their enemies tear them apart?

Arbella de Mowbray contemplated running away. The forest was conveniently to her left and still thick with leaves. Perhaps she could join a ring of outlaws hidden within the imposing foliage.

She shifted restlessly on her mare, arranging her skirts first one way and then another. The horse responded with an annoyed snort. If only she weren’t with a dozen guards and her father.

“Oh, hush, Bitsy,” she scoffed. The animal had no idea what was at stake here.

Anything would be better than permanently leaving England—and for Scotland! The land of heathens, barbarians… Oh, the horrors she’d heard went on there! The men ate their young. The warriors kept the bones of their victims tied to their beards. The horses were trained to sniff out an English lady and trample her to death. The women were witches. The children ran naked, even in the dead of winter. And the winters, how could she forget? No person of truly English blood could survive one.

She was glad that her maid Glenda had told her all she needed to know of Scotland. Although she could have done without the woman’s tears and fainting when Arbella asked her to join her on the journey. As a result, her old maid was not with her—in fact none of the female servants at Mowbray Manor would accompany her. She was alone, without help. Not that she needed help, but it would have been nice when she arrived in a foreign country to have someone with her from home. And while her father promised her husband would provide a maid, that maid would be Scots.

She would die before the new year—either from frostbite or at the hands of the dreaded Scots.

Now granted, her father said she would be marrying an English baron, but that mattered little. They would still reside in Scotland. And no doubt her baron husband would be just as brutal, if not more so, than the savages she’d heard tales of. Indeed, he would have to be if he kept them all tightly reined in. She knew little of her intended. Never met the man. Never heard any stories. He was a mystery. She discounted the things her father told her. He only honeyed the character of Marmaduke Stewart, hoping to sweeten the horror of her upcoming nuptials.

Arbella shivered, and rubbed her cloak-covered arms, contemplating the forest along the edge of the road. Late in the afternoon, the sun was hidden behind the trees making the road to Scotland chilly. A slight breeze blew, wrenching her hood from her head and pulling a few strands of hair from her tight chignon. Arbella tucked the hair back into the knot and pulled her hood over her ears. She hated the cold. Death might take her before the week was out. She’d no doubt shiver like mad in her new bed since the Scots abhorred warming their homes by fire. Another fact from Glenda. One thing was certain—she didn’t want to die anytime soon.

Connect with her at http://www.elizaknight.com or http://www.historyundressed.com. You can sign up for her newsletter at  http://eepurl.com/CSFFD. Follow her on social media at:

Wednesday, May 17
Book reviewed at My Book Addiction and More
Book featured at Voodoo Princess