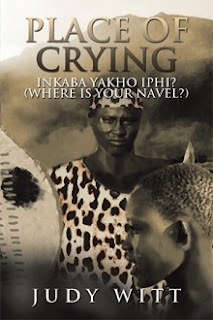 INKABA YAKHO IPHI? (WHERE IS YOUR NAVEL?) Three stories—those of the Xhosa and the Khoikhoi tribes, the British soldiers and the settlers, and the burghers and the Boers—are told in parallel. Her Khoikhoi mother, had named her Coti after the wife of Cagn, the supreme god of the San people. Her skin shone like gold, the skin of the San. He had been watching as she bathed in the lagoon, blinded by her sleek beauty as she stepped out. The fading sunlight on the water drops covered her golden skin like jewels. Coti gasped when she saw him. He was Tshane, great-great-grandson of a Xhosa chief and named after one of the first Rharhabe Xhosa kings or paramount (supreme) chiefs. His mother was from the Gcaleka Xhosa clan. Tshane represented the amaXhosa, the fierce people of Xhosa. He was magnificent as he stood still and tall—a warrior, black as ebony; his toned muscles rippled. He was nervous. She was not afraid of him. She prayed now to the wise and powerful Tsui-Goab, the Khoi supreme god, to protect her from Guanab, the cunning god of evil. Her grandmother had warned that this was an evil love, brought about by the trickster god, Haitsa-Aibib. Haitsa-Aibib could change his form at will. Was he the fish eagle that had thrown the cloud over her? Lt. Ian Bentley sat his horse on a hill overlooking the coastal foothills of the Amatola Mountains. From his position, he had a good view of the sea and also the Xhosa village below him. It was baking hot under the African sun, and he looked forward to the cool evening. He sweated in his thick red tunic, made for cooler climates, and his horse fidgeted from the flies. Taking his eyeglass from his tunic, he focused on the village below. Conraad du Randt, the burghers’ leader, raised his arm for silence. ‘Yes, my people. First, they free the slaves and tell us to pay them. Now they have equality before the law? These heathens are our subordinates, damned in the eyes of God! Given to us to teach them Christian ways! Our land! Our lifestyle! Is God-given and earned by conquest!’


Meet the Author:
Judy Witt was born in Natal in South Africa on January 1944. She was raised by Zulu women and then Xhosa women when the family moved to Port Elizabeth in the Eastern Cape. The family later moved to Southern Rhodesia and Northern Rhodesia during the years those countries were fighting for freedom and independence. Caught up in the violence and terror that evolved and the Congo Revolution spillover, they returned to South Africa the day before Zambia’s independence. Judy now lives in Sydney Australia with her husband, four married children, nine grandchildren, and one great-grandchild.

Tuesday, December 18
The Hype and the Hoopla
The Revolving Bookshelf

Friday, December 21
From Paperback to Leatherbound
A Title Wave

Thursday, December 27
Confessions of an Eccentric Bookaholic
A Taste of My Mind

Friday, December 28
The Dark Phantom
All Inclusive Retort
at 7:21 AM