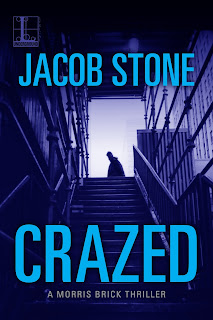 L.A. detective Morris Brick has seen the face of evil. He has witnessed the grisly handiwork of a deranged sadist known as SCK—the Skull Cracker Killer. But Brick isn’t the only one watching. A crazed lunatic’s interest in the case has turned into a deadly obsession. This sicko vows to outdo SCK and reach new heights of macabre mayhem. The mounting body count is a personal challenge to Brick. But as he lays his trap, he can hardly imagine the evil he is about to face . . .

Jacob Stone is the byline chosen by award-winning author Dave Zeltserman for his new Morris Brick series of serial-killer thrillers. His crime, mystery and horror fiction has won top praise and has been translated into six languages. His novels Small Crimes and Pariah were both named by the Washington Post as best books of the year. Small Crimes topped National Public Radio's list of best crime and mystery novels of 2008 and is being made into a feature film. Dave lives in the Boston area.