CHEMO MUSCLES: LESSONS LEARNED FROM BEING A PSYCHO-ONCOLOGIST AND CANCER PATIENT
By Renee A. Exelbert, PhD
Autobiography/Health/Fitness

In Chemo Muscles: Lessons Learned from Being a Psycho-Oncologist and Cancer Patient, Exelbert reflects on her experience of confronting her cancer diagnosis, as the doctor becomes the patient.

Exelbert was diagnosed with breast cancer in 2007 after working as a psychologist in a pediatric cancer center in Long Island, NY. A wife and mother of two young children, she struggled with vulnerability and identity. As a medical professional, she had both challenging and elevating experiences with healthcare professionals. And ultimately, she became a certified personal trainer and bodybuilding figure competitor to regain a sense of control over her body.

With unflinching candor and detail, Exelbert shares her story by pairing it with psychological theory, well-researched coping techniques for patients and families, and guidance to aid healthcare professionals in treating people with greater dignity, understanding, and respect.

“By sharing the inner-most thoughts and emotions she experienced throughout her breast cancer journey, Dr. Exelbert provides validation that “life-altering” doesn’t necessarily condemn a cancer patient to a life that is “less than” it once was. Her dual perspectives as both a patient and a psychologist provide a unique opportunity to merge the raw emotional impact of the diagnosis with clinical training, thereby allowing her to process and understand the experience in a way that is both reassuring and empowering.”
— Jane E. Austin, Ph.D., Professor, William Paterson University

“This is less a book about cancer and the healing effects of exercise and diet as much as it is about the power of resilience; about confronting the unimaginable and what it takes to come out the other side. By allowing the reader into her personal journey, Dr. Exelbert invites us to explore the human dimensions of illness, seamlessly weaving between best psychological practices and the simple needs that we all have as members of the human family. For those of us working in the cancer community – or in any other community for that matter – this book is a must-read. It summons us to remember our humanity – to not hide behind cold clinical jargon and artificial barriers – and reminds us of the power we each possess to not only ease our own fears and pain, but those of our fellow travelers.”
— Arnie Preminger, CEO/Founder, Sunrise Association International summer and year-round programs for children with cancer and their siblings

“In this important and inspiring book, Dr. Exelbert shares her personal and emotional journey through cancer, with the vulnerability of a patient, the expertise of a psycho-oncologist, and with a generosity of heart that makes this book an essential guide for cancer patients, their families and clinicians alike. Lessons gleaned from personal suffering and transformation, combined with valuable knowledge from psychological and medical research, nutrition, and exercise, will undoubtedly leave the reader not only better informed, but empowered with hope and courage amidst the struggle with serious illness.”
— Anthony P. Bossis, Ph.D., Psycho-oncologist, New York University School of Medicine 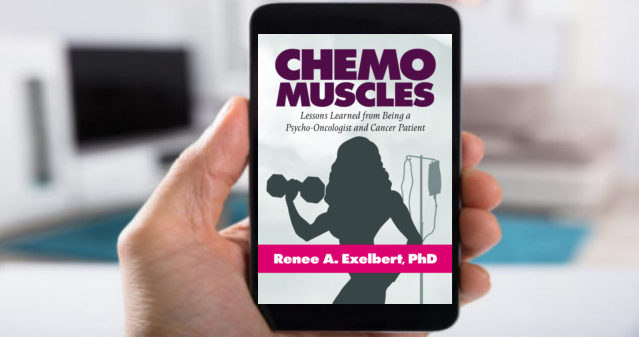 One Breast or Two?
I still had not decided if I was going to have the requisite single
mastectomy, or a prophylactic bilateral mastectomy. There were some
studies that showed a miniscule chance of breast cancer spreading to
the other breast. My plastic surgeon had discussed that there would
also be a lack of symmetry between my breasts had I elected to have
the single mastectomy. He commented that they would be “sisters”
rather than “twins.” Two days prior to having surgery, I was sent for
a final scan of my breasts. My right breast was the one that had the
malignancies, however, there was some concern that the cancer might
be present in the left breast. The amount of terror I experienced about
the possibility of having more cancer was beyond measure. It turned
out to be nothing, merely dense breasts. However, my doctor notified
me that from this point forward, I would be checked much more
frequently in the existing breast. The prospect of experiencing more
scares due to dense or cystic breasts was something I could not handle.
I decided then and there that I would opt for the prophylactic bilateral
mastectomy. It was not an easy choice, as I could have kept one breast
and therefore preserved some sense of my existing identity, femininity,
and beauty. I had several people close to me as well as Dr. A, my old
boss from the pediatric cancer center, try to convince me that having the
bilateral mastectomy was a drastic and unnecessary measure. On
the other hand, I had been so freaked out by cancer and the possibility
of future trauma, that I felt it best to minimize any and all risks. When
I arrived for surgery, my surgeon, Dr. M, still had not been notified of
my final decision. She asked me in a perfunctory tone, “One breast or
two?” as this was her common vernacular, and illustrative of surgery
that she routinely performed. I couldn’t help but be struck by the metaphor
to coffee—would I like one lump of sugar or two? Additionally,
Dr. K and Dr. M had asked me if they would be removing a mole that
I had between my breasts, as surgery was the perfect time to get rid
of it. It was not attractive, but it had become a part of me. I told them
that I did not want to lose any more of me than I needed to, and that I
wanted to keep my mole. They both joked with me about how hideous
my mole was going to look with my brand-new boobs. They made me
laugh and brought levity to an agonizing experience. Nonetheless, I
am so glad that I kept my mole. We have been through a lot together.
I spent a few final minutes alone with Billy, who gently touched and
kissed my boobs. He then said “goodbye guys.” We cried and held each
other. His unconditional love and acceptance let me know that no
matter how this surgery altered my body, he would always love me and
find me beautiful. And with that, I was wheeled into surgery.
As the anesthesia was administered and I was lying down, terrified
for how this next chapter of my life was about to unfold, Dr. M held
my hand and supported me. It was such a small gesture, but meant the
world to me. 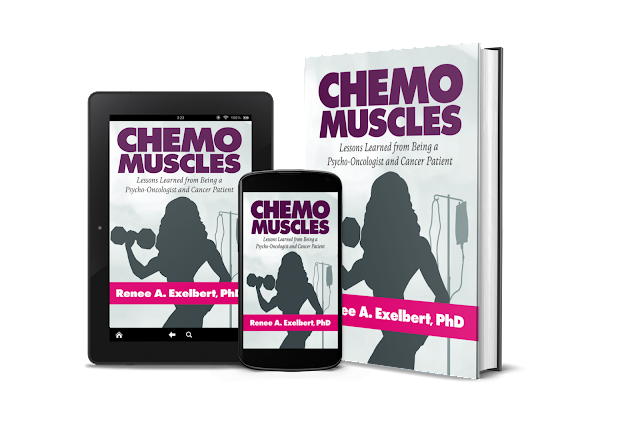 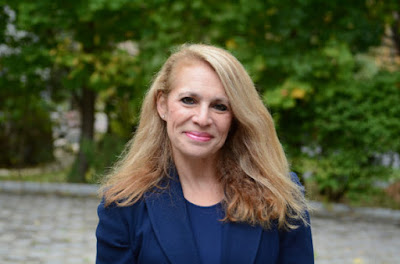 Renee A. Exelbert, Ph.D., CFT, is both a licensed psychologist and certified personal trainer. She is the Founding Director of The Metamorphosis Center for Psychological and Physical Change, where she integrates psychotherapy and exercise with a focus on the mind/body connection. She maintains a private practice in New York City, Manhasset and Nyack, New York for the treatment of children, adolescents, adults and families. Dr. Exelbert is also an Adjunct Professor in the Department of Applied Psychology at the New York University Steinhardt School of Culture, Education and Human Development where she teaches Masters-level psychology courses. She previously served as Staff Psychologist at the Winthrop University Hospital Cancer Center for Kids, working with children and adolescents diagnosed with cancer.

Renee A. Exelbert is giving away an autographed copy of CHEMO MUSCLES!

Book Feature: 10 Letters to a Stranger by Sarah S. Saeed 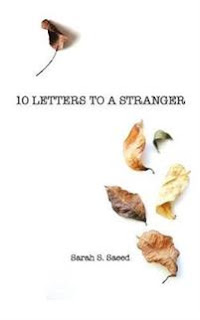 Book Blast: Thunder in the Wind by Curt Orloff 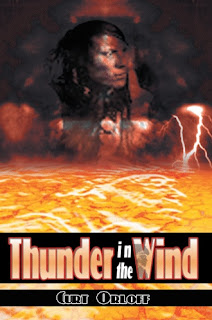 Thunder in the Wind is a historical novel concerning the assimilation reservation American Indians underwent at the turn of the twentieth century. The first part of the work describes how the Assiniboine, and one family in particular, deal with the onslaught of a society that not only was technologically superior, but also thought itself so morally superior it treats the tribe as if it was a hopeless dependent. The second part follows the exploits of the main character as he tries to unite the Plains, Great Basin, and Southwestern tribes in revolt, not to defeat the whites, but to scare them so badly they would restore to the Indians the selfhood they had stolen. Miskaw deals with the same trials Tecumseh experienced early in the previous century while uniting the tribes east of the Mississippi and, in dealing with them learns several truths about himself and the human condition. If not for hubris, the outcome of his endeavor may have been dramatically different.

I'm a Yankee who became a damn Yankee when I wouldn't leave the South. When I did leave it, was for overseas where I comfortably acquired the moniker of "yank". I have two bachelor degrees. The one in geology I use to support myself, the one in history just showed I am curious about human nature. This curiosity culminated in Thunder in the Wind after I found out about a Cree named Almighty Voice while I was engaged in geologic fieldwork in Montana. His revolt almost united the tribes. I was an Army 1st Lieutenant, lived for golf as a youth and got to play on the University of Houston golf team, and was an Eagle Boy Scout. I've been writing books for over two decades, getting only to the agent level. At present, one agent is peddling a novel I wrote about the oilfield. I was a well-site geologist for fourteen years and a petroleum engineer, mostly overseas, for seven years.

January 27
A Title Wave
Confessions of an Eccentric Bookaholic
January 28
The Hype and the Hoopla
The Review From Here
January 29
Harmonious Publicity
Write and Take Flight
January 30
Carpe Librum
Read Between the Ink
January 31
Fiction to Fruition
From Paperback to Leatherbound
February 3
My Bookish Pleasures
The Literary Nook
February 4
Voodoo Princess
The Revolving Bookshelf
February 5
The Book Refuge
The Book Czar
February 6
Lover of Literature
Zensanity
February 7
Personovelty
A Taste of My Mind
at 7:44 AM No comments:

Book Blast: 10 Letters to a Stranger by Sarah S. Saeed